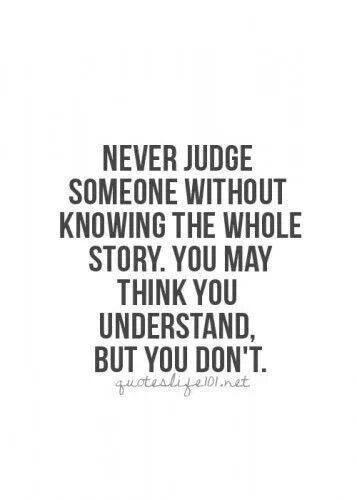 Prejudgment, or forming an opinion before becoming aware of the relevant facts of a case.

So many types to mention but I want to address the one most are guilty of every day. One of which does not come up when you google ‘Types of Prejudice’. I reckon I consider this type as Prejudice of Condition.

Lately, I have observed this prejudice first hand. But I was not a stranger to it in the past. Back then it enraged me. Now? Not so much. But it does disappoint me.

So what is prejudice of condition? Let’s explore some examples.

Take Sally for example, she wears decent clothes, holds a steady job; but recently, has indicated that she is having cash problems. Those around her judge her statement as disingenuous as she always has what appears to be nice clothes, perfectly manicured nails. “Hell, if she can spend the cash on clothes and manicures, she’s not as skint as she says. What a liar!”

No one knows she was forced to max her credit card to pay for unexpected repairs on her car, she does her own nails and her clothes are from a charity shop.
____

Another example comes in the form of a meme which has circulated on facebook timelines for several years now. Even I have shared it to remind those around me to be less quick to judge.

“You can’t see my problems, you can’t see my pain. You don’t understand the thoughts going round in my brain. My illness is not visible, it’s not on display. But it’s a battle I fight with each and every day…”

For those with chronic illness, including me, we endure each day knowing we will have good ones and just plain horrible ones. We never know what the next day will be. Our minds are preoccupied with what this could very well be and we fight the fears with the mantra that it may not be since the tests were negative the last time. Just because we continue to fight– to appear normal — doesn’t mean our situation is made up or any less real. We want normal lives, and we will do what we can when we can. We live with what we have and try to make the best of it even in our worst moments.

It is sad to discover someone close to you is judging based on their definition of what sick should look like just because you canceled plans when you weren’t feeling well enough to cater to them. Because after all, it is all about them.

Finally, the last example is the one I think I am most susceptible to committing and being the target at the same time. Judging personality based on visage. I have resting bitch face. I know what it is like to be judged by my relaxed demeanor. Some people find me very off putting due to my expression. I haven’t minded too much because the introvert in me is kind of relieved.

But I have been very guilty of doing the same. Not just with people with resting bitch face, but with others whose outward appearance seems intimidating and I assume they are cold or abusive in nature when actually they probably are super kind and warm.

It’s a terrible thing, prejudgements. Because in these judgements we prevent caring relationships to be formed or maintained. Be wary of your quick to conclude thoughts when dealing with others. Remind yourself of how it feels to be judged without the full information.